This case study is focused on the work conducted by MindSEO, regarding the digital strategy for Century 21 Iberia. Century 21 is a real estate mediation company, who trusted MindSEO, with it's expertise and knowledge over technological platforms, to take on the responsibility for planning and implementing strategies and actions needed for the online growth of the company, in the Iberic Peninsula (Portugal and Spain), along with the support over the development of the online platform used not only in Portugal and Spain, but also in several countries where the real estate network is present.

CHALLENGE: Increase and qualify traffic acquisition for the Portuguese and Spanish website, in order to increase brand visibility and generate qualified leads. 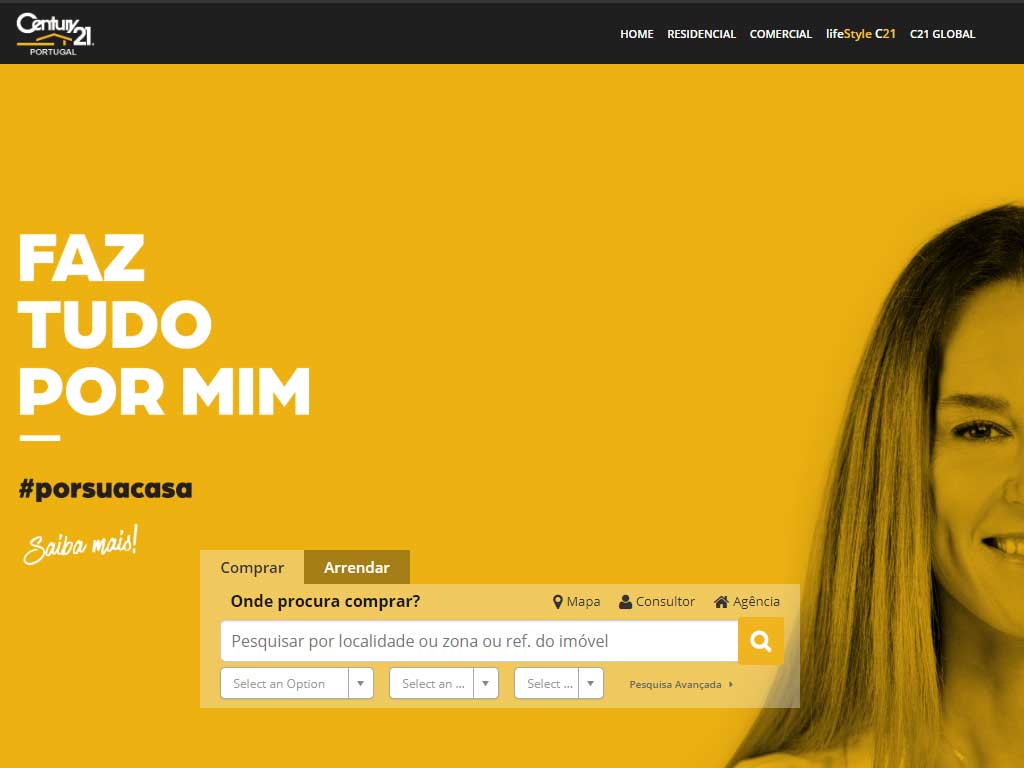 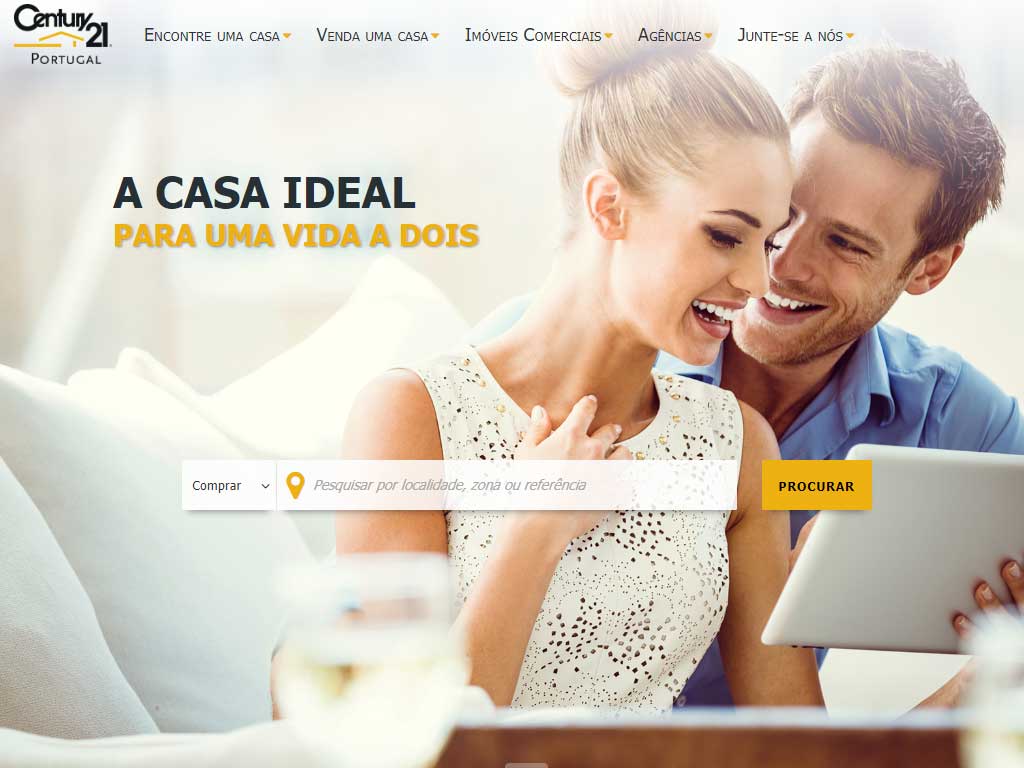 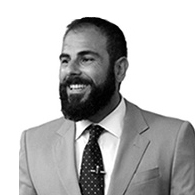 “For the past years, Century 21 Iberia has been increasing its bet on digital marketing, along with online and mobile advertising. New technological platforms are, ever more, implicating a reorganisation of the integrated communication strategy for brands, and digital channels are revealing themselves as inevitable instruments in allowing a company's message to reach its target audience with greater efficiency and objectivity. MindSEO as been a great help with our digital strategy implementation".

Century 21 Iberia digital strategy, proposed by MindSEO, was developed and refined over two years. A strategic plan was elaborated, with campaign scheduling and budget distribution over each year, considering traffic fluctuations and specific research habits for the real estate market. MindSEO's strategy defined the type of campaigns, the choice of main channels and envolved also managing and optimising these campaigns.

The plan resulted in Video, Search and Remarketing campaigns, supported by two annual shots of Programmatic Advertising, along 2016 and 2017. Each campaign was defined with its own objectives, such as obtaining qualified traffic for the websites, gather qualified leads, increase brand awareness and visibility on the digital level.

In the first year, 2016, Programmatic Advertising campaigns that were launched had the objective of acquiring greater exposition and brand positioning for the national audience. We wanted to strengthen a brand that was going for a closer, modern, technological and innovative approach.

With the insights gathered over 2016, we were able to optimise all campaigns and get better results from the start of 2017. In 2017 the first Programmatic Advertising shot was dedicated to branding, based on the strategy we had in 2016, and considering the data we gathered with previous campaigns. During the year, this campaign had a few changes and optimisations, as consumers behaviour is in constant change along with their interests and needs. For the second shot a new campaign, with different objectives, was created. We proposed that the planned campaign for the offline channel was integrated on the online channel. This new campaign was focused on acquiring more properties and then foster the impulse of buying a new home in consumers.

At the same time, lead generation campaigns were launched, for people interested in buying a real estate franchise, and for gathering properties and real estate salespersons. Along with these, we had branding, remarketing and segmented traffic acquisition campaigns. On one hand, branding campaigns were focused on maintaining a constant online presence, on the other hand remarketing campaigns were focused on exposing users that visited Century 21's website to ads on other websites, regarding their interest in certain products and/or categories of the website.

Century 21 Iberia was present on all main media networks in Portugal, and also on reference websites, such as The New York Times, The Guardian, AS, or El País, for Portuguese and Spanish traffic. Without this technology and MindSEO's methodology, ad insertion on these placements would have involved much more work and would have been more expensive.

In terms of Organic Search, MindSEO's work started with a preliminary analysis over Century 21's website and digital ecosystem. Through this preliminary analysis,  we found that Search Engines (SE's) were only detecting and indexing about twelve static pages of the entire website. The remaining pages were dynamically built and for that reason were not being detected and indexed by SE's. Therefore, the project implicated that a new web platform would be built, considering a restructuration of the website's architecture of information and the creation of a new URL structure along with the construction of new pages that allowed tracking and indexing by the SE's. This proposal involved a deep analysis of the type of business, Century 21's digital ecosystem, competitors, and user search habits over this market type through Keyword Research and Analysis.

The accompaniment made over these two years also resulted in various suggestions and interventions on SEO and Usability over Century21's website pages (static pages, category pages and property pages) along with changes to improve the information presented on property cards and code related issues - such as responsivity and usability - and website performance (page loading).

“How to get traffic and qualified leads?”

The Answer:
One of the techniques that bring more traffic and generate qualified leads is ad customisation. With this we can increase brand awareness, remembrance and affinity with the consumer and, consequently, lead to action. MindSEO used Programmatic Advertising Campaigns because we realised that customisation led consumers to make non-planned purchases and spend more than what they planned, turning them into loyal customers. In order to increase and qualify traffic acquisition, it is also important to create dedicated landing pages and perfect the website's SEO. With these practices, besides increasing traffic and qualified leads, brand awareness and visibility are also improved.

From the moment that CENTURY 21 Iberia trusted MindSEO to help with their digital strategy, both traffic and leads generated increased exponentially, through the performance campaigns.

Comparing the year 2015 - before starting this project - with 2017, CENTURY 21 Portugal increased their website's organic traffic by 44.7%. On the other hand, paid search traffic increased by 317.28% in the same period, maintaining investment levels. Without any measuring over the number of leads gathered in 2015, we realized that from 2016 to 2017, the number of leads generated increased by 45.3%.

If you want to grow your business by implementing strategies and actions for online growth, send us a message.

You can set your which cookies you want to allow. You can also change these definitions at any time. However, your decision may result in some website funcionalities to be disabled, hence unavailable to you. If you need more information about deleting cookies, please check your browser help. Know more about our Cookies.

This tool allows you to enable/disable the differet types of cookies we use: